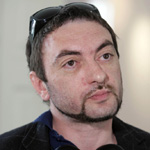 The CV is sorted by an approximate chronological timing of events from the most recent to the former ones: